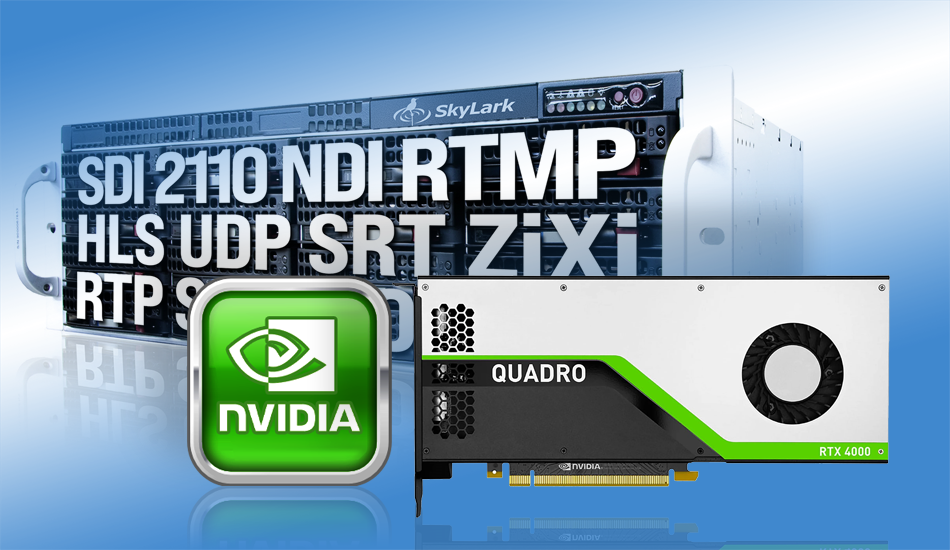 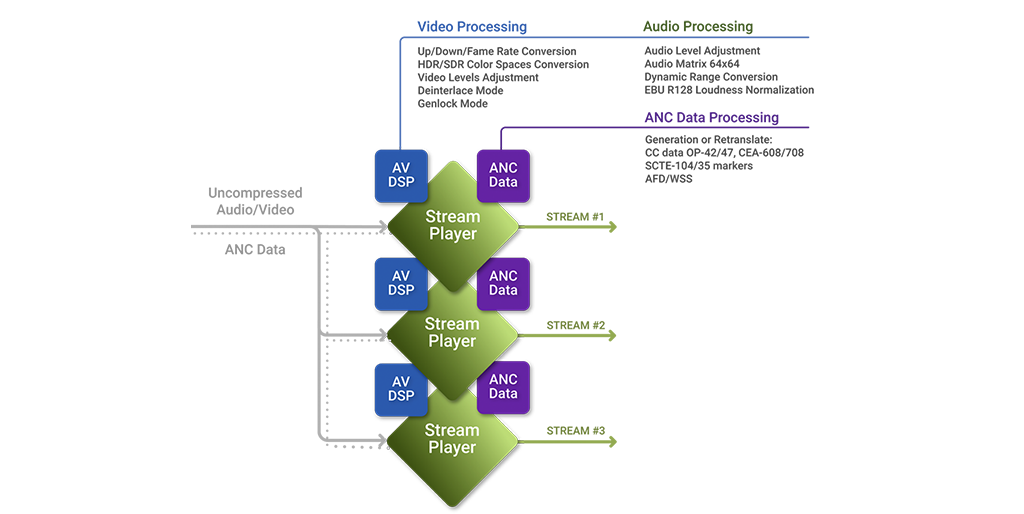 Diagram of Processing & Encoding operations. Multibitrate is provided by a certain number of Stream Player modules

ST 2110 is a suite of standards from the Society of Motion Picture and Television Engineers (SMPTE) that describes how to send digital media over an IP network. ST 2110 is intended to be used within broadcast production and distribution facilities where quality and flexibility are more important than bandwidth efficiency.

NDI is an open protocol, a standard that allows multiple video systems to identify each other and communicate over an IP connection to encode, convert and receive high quality streaming video and audio data with minimal delay. Many see it as an easier and cheaper route to IP-based operations than the expensive SMPTE standards. The protocol allows remote device control in addition to video, audio, and service information. Supports a wide range of video devices, such as video mixers, PTZ cameras.

MPEG-DASH is an open standard HTTP-based adaptive streaming protocol that sends video and audio content over a network in small segments of TCP-based streaming media that are reassembled at the destination. MPEG-DASH functions in much the same way as HLS, operating on a «quality over latency» principle, so latency times can be high.

The User Datagram Protocol (UDP) is one of the main communication protocols. It has no handshake dialogs and thus exposes the user to any unreliability of the base network. Time-sensitive applications often use UDP because dropping packets is preferable to waiting for packets delayed due to retransmission, which may not be possible in a real-time system.

SRT provides high quality video and audio transmission over the Internet with low latency, provides firewall traversal between source and destination. SRT uses its own recovery method after packet loss, using UDP packets. When network conditions are poor, buffer sizes can be increased to improve video quality. As network conditions improve, the amount of delay can be reduced.

RIST is an open-source, open-specification transport protocol designed for reliable transmission of video over lossy networks (including the Internet) with low latency and high quality. RIST is intended as a more reliable successor to SRT, and as an open alternative to proprietary commercial options such as Zixi, VideoFlow, QVidium, and DVEO (Dozer).