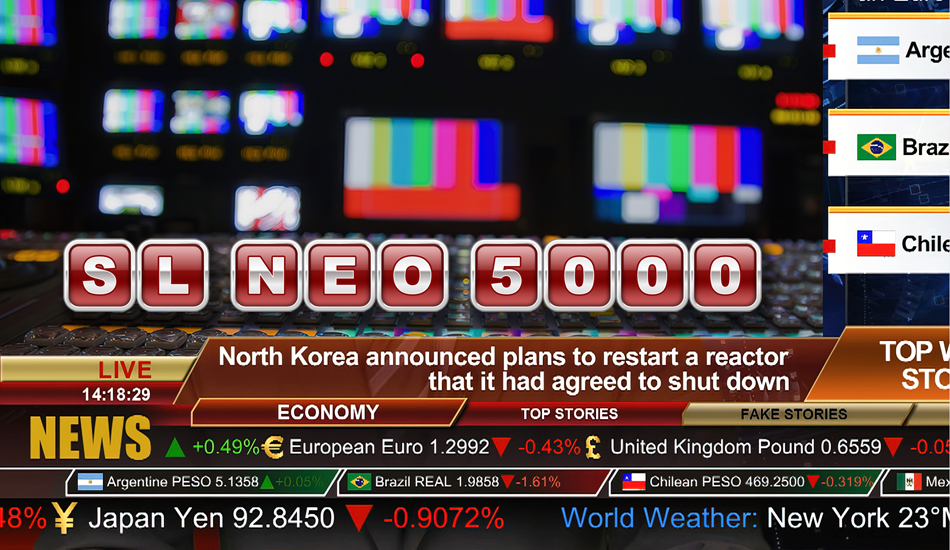 One of the basic functions of the SL NEO platform is the graphic design and branding of UHD/HD/SD on-air channels and TV programs in studio and OB production. Servers running under the SL NEO software overlay graphics on the input Live video, on the playback file materials, receive and generate Fill and Key in SDI and NDI streams.

Texts and any other graphic objects can be automatically parameterized during playback: replaced with data from external sources, or with data from the main schedule.

Each module performs the playlist of its broadcast channel and creates the final «picture» of the channel with multilayer graphics and final audio. To perform its tasks, the software player is capable of playing up to 20 video and graphics files simultaneously and receiving «live» feeds as inputs.

The module aggregates all layers of video, graphics, captions, and audio into a single full-screen program signal output. The program output signal is a composition containing several layers (from bottom to top):

The SL NEO Software allows you to Playback Graphics evets in next modes:

The Client Software Kit includes a network Graphics Editor that allows you to create and edit multilayer compositions and design templates. It is a module within the application’s Air Manager, News Cut, connect and interacts with SL NEO Media Database. All source materials for and results of the work are stored on SL NEO Server array, allowing for network collaboration between multiple users and instant playback of created compositions. 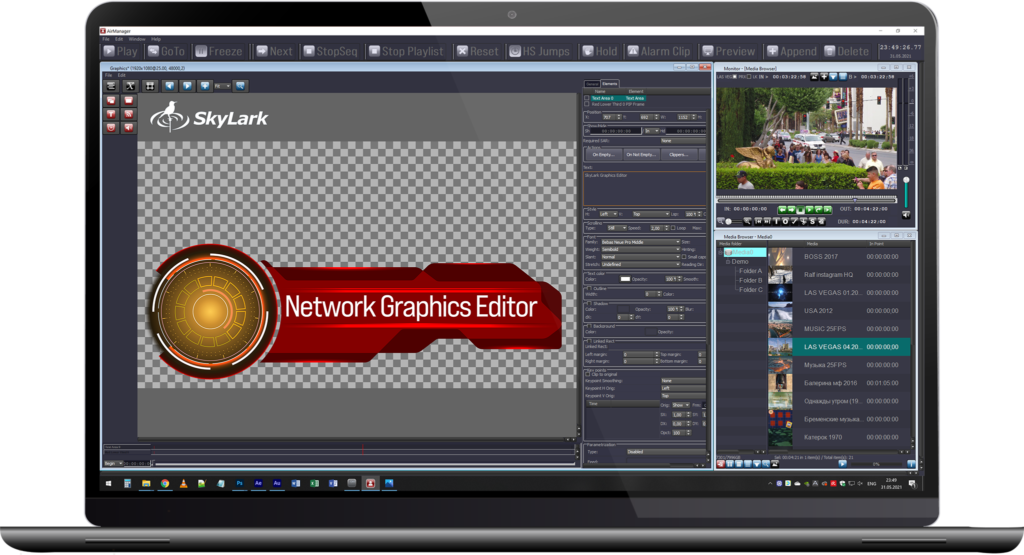 The number of these objects is not limited. They can be randomly combined with any other objects. The content of the text can be dynamically changed by reading the information from external sources.

Data from external sources — text information that is read from txt- or xml-files or comes from information service providers in the form of RSS-resources and is displayed by the SL NEO server graphic «engine» as crawl lines, scrolling lists or changing each other text lines. Typical examples are info-bars, SMS chats, news crawls, weather information and currency exchange rates. 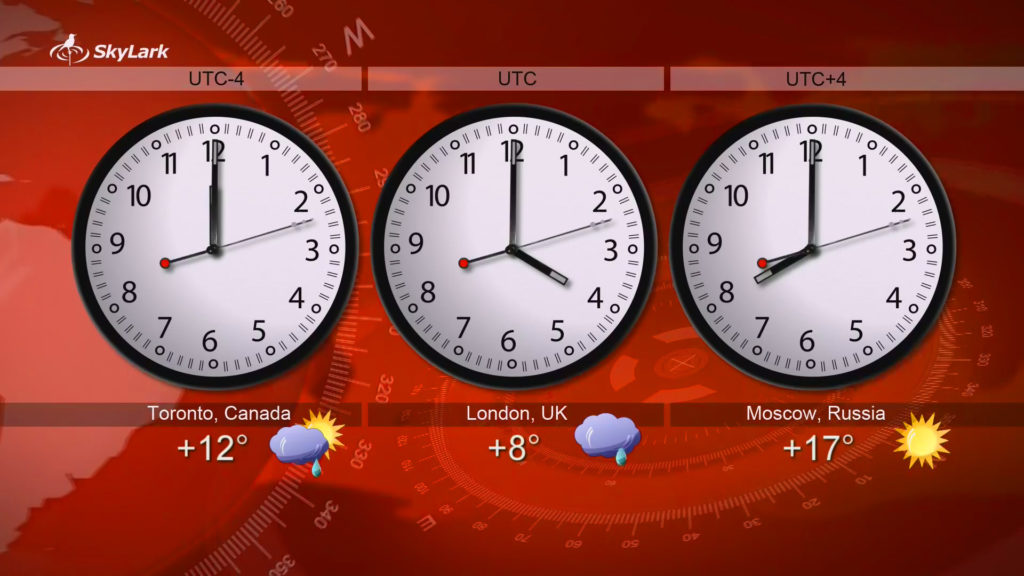 When designing a channel, all design compositions can be logically distributed into virtual players/layers, for example:

Starting and stopping the playback in each of the graphic players is linked to events in the main playlist, either to the current time, or manually. «Binding» to events means commanding to start a Graphics Player event after a set time from the start of the main event and/or a set time from its end.

Squeeze Back is a method for displaying additional information (such as ads and promotions) that reduces the image size of the current playlist event in order to display ads on a free area of the screen. The SL NEO Software allow you to implement this feature in 2 modes:

Parameterization and auto-generation of secondary events

When designing on-air channels, the technology of parametrization and autogeneration of secondary events will be useful. When it is used, the general design of the program or channel is formed, and the text data themselves are loaded separately — for example, from the fields of the main playlist.

This allows you to generate graphics by replacing only the text in the templates. At the same time, the on-air playlist is the only document containing all the information about the on-air events, graphic start marks and text information. If necessary, it is possible to quickly change the design of all crawls and titles by simply replacing the corresponding template — the design source.

When designing TV news bulletins, design templates are used. For this purpose, a general design is formed and the text data itself is typed or downloaded separately. This allows you to «detach» text information from graphics, replacing only the text. It is possible to change the design of all crawl lines and captions by simply replacing the corresponding graphic composition — the design source.

All source materials and results of work are stored on the server array under database control, which makes it possible for users to work together, and the high-performance graphics «engine» of the server ensures instant playback of compositions without any preliminary calculations.

You can work with any font and encoding available in Windows, including Arabic fonts and left-to-right text movement.